With Good Beer Week almost upon us we thought we would let everyone know the events that we’ll be trying to make it to. After spending weeks going back and forth over the program, we’ve come up with an attack plan on where we want to be each day of this incredible week.

With so many events packed into these ten days our plans are sure to change but these look like some really exciting highlights to us. Of course it isn’t truly a Good Beer Week if we aren’t madly dashing across the city, trying to get ourselves into as many venues as our feet, wallets and livers will allow!

Will you be at any of these events? What are you most excited for?

Be at Beer Deluxe, the festival hub, when it all begins. This is probably the easiest pick of the week, since it’s technically the only event for the first Friday. The night features live music, fun times, and (of course) great beer!

Something a little bit different. Hawkers Beer are transforming their brewery into a cinema for one night only. They aren’t playing any old movie either, they be playing two Quentin Tarantino classics back to back; Pulp Fiction and Reservoir Dogs. Plenty of bad impersonations and (miss)quotes are sure to take centre stage all night and surely there will be some kind of dance competition.

The opening of one of Melbourne’s newest breweries is something we wouldn’t even think about missing. Stomping Ground Brewery and Taproom is set to be the first brewery in Collingwood in over a hundred years and is the latest beer venture by the folks behind St Kilda’s Local Taphouse and the Great Australasian Beer SpecTAPular.

Monday: From Homebrewer to Pro Brewer

One for the homebrewer messing around in their garage who wonders if he or she has what it takes to become pro. This is sure to be a relaxed and fun Q & A session with both newer professional brewers as those that have been around for a little while talking over what its like to turn from amateur into a professional.

For the uninitiated Forgotten Worlds is a bar in Collingwood that’s full of old-school arcade games. They are doing a number of ‘lock-in’ sessions over a few nights where they give you free play on their machines. Each night features a different brewery tap takeover, and we figure it’s pretty hard to go past the always interesting and tasty beers by Brewcult.

Wednesday: Ales of the Ages

One for those who love history as well as beer! Explore beer’s dark and cloudy past with Ballarat’s Red Duck Brewery and the Yarra Valley’s own Napoleone Beer and Cider!

Carwyn Cellars are putting on simple but delicious meet the brewer lunches with the folks from Little Drop of Poison every weekday during the festival. Thursday’s incarnation features two local Melbourne brewers, Exit and Kaiju, who will be highlighting some of their incredible brews.

Often cited as one of the greatest beer festivals in the world the Great Australasian Beer SpecTAPular takes place over the last weekend of GBW. Featuring over 100 different breweries all making unique beers for the festival, if you live in Melbourne you don’t want to miss this (even if you live anywhere else you should be booking flights).

What kind of city would Melbourne be without great live music? The Old Bar has long been an important live music venue and has recently undergone a bit of a beer renovation (beer-novation? beer-naissance? beer-olution?) that has seen craftier taps added to its line-up. Rock & roll and IPAs; we get the fixation.

Often American tap-takeovers and big hoppy beers get a lot of attention during GBW so we think it’s important to remember other great aspect of beer. While the idea of traditional English style cask ales served at room temperature may sound unappealing to some Australians we think it’s the perfect way to enjoy beer in winter and can’t wait to see what these incredible breweries put together.

A special mention to these events which run all week:

Featuring over a dozen venues showcasing beers from 6 Australian states and across the world stop in any of the Pint of Origin venues during the week to enjoy beers from beers from some of the world’s great beer regions.

A pie made with one of Victoria’s leading craft breweries stouts and Victorian Angus beef. Perfect pit stop for lunch!

San Diego is home to some of the greatest American breweries. We are huge fans of Ballast Point’s Sculpin IPA, which will be making an appearance under various fruity incarnations. Some IPAs from Karl Strauss that have never before bee seen in Australia are rumoured to make an appearance too. 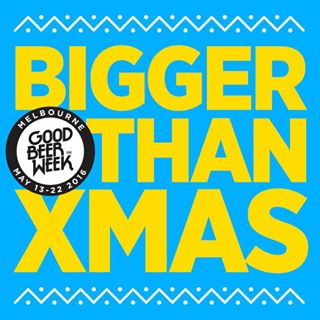