Jackson Voorhaar is a veteran of the Melbourne comedy scene, having first started performing stand-up back in 2008. After just a year he moved to London and played comedy clubs up and down the UK for two years. His time in the UK included shows at the internationally renowned Edinburgh Fringe and Bath Comedy Festivals. He’s been privileged to share stages with the likes of Bill Bailey, Stephen K. Amos, Marc Maron and Paul Foot in this time and has also performed shows in Ireland, the USA and Germany.

Beer Makes me Funny is Jackson’s sixth consecutive Melbourne International Comedy Festival show and is the love child of his two biggest passions: humor and beer. As a committed and long-suffering beer geek he always has hops on his mind and ca be found chasing the rarest and most interesting brews that are out there. Much like a good beer itself, his sense of humor is lively, well-crafted and perfectly executed. Above all else Jackson is most excited for an actual excuse to drink beer on stage.

Don’t forget to buy your tickets for Beer Makes Me Funny by following the link below!

“Jackson Voorhaar may not be able to play guitar, but he certainly rocks. Hilarious” - Herald Sun 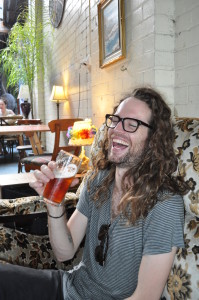